The refugee exodus into Europe: a preventable crisis and the inevitable demographic revolution

We asked on our July 5, 2014 post (click here), ‘What would European governments do if in a single day 20,000 or 30,000 migrants cross the Mediterranean Sea and reach European shores?’ Our answer was that European governments will wait for the refugee crisis to explode in our face before doing anything. We have reached that point and our answer was not that inaccurate. However, our 20,000-30,000 figure turned out to be a little conservative, as besides the boat refugees there are now thousands finding their way into Europe by foot, daily. The refugee exodus into Europe has reached critical mass and unstoppable momentum.

We wrote on our post of April 22, 2011 (click here) that  ‘the social and economic costs of a North African exodus into Europe would be astronomical and, we adventure to suggest, might have become the chief issue underpinning the growing role of Europe in the Libyan conflict.’  On the latter issue, however, we were wrong. Little was done to fix Libya. ‘Arab Spring’ Libya morphed into the key launch pad used by human traffickers to transport refugees and economic migrants from across Africa into Europe. These people are escaping conflict or simply searching for a better life. There is nothing wrong with that. But should we continue allowing organized crime to set the migration agenda instead of humanitarian organizations and the recipient governments? Due to neglect by the international community, subsequently Libya also turned into one of ISIS’ new frontiers. Please do make a connection between the two issues and brainstorm potentially dangerous scenarios.

There were many signs that things were getting out of control. Since 2011, we have highlighted some pressing concerns in blogs and forums. If you have not been following this issue, it is worth reminding you of the systematic attempts by migrants, mostly young male, to penetrate the Spanish enclaves in North Africa. During the first weekend of May 2015, up to 7,000 migrants were rescued in the Mediterranean Sea. This happened two weeks after about 900 drowned in one of the worst shipwrecks since the onset of the refugee crisis. Inside Europe, ever larger and better organized groups of migrants continue to attempt bypassing security at Calais, in France, in their attempt to reach the United Kingdom. Did you hear about the migrant who practically walked all the length of the Eurotunnel (the 31.4 mile Channel Tunnel connecting France with the UK) undetected ?

On August 19, 2015, Germany released an official projection in which it stated that they expected to receive some 800,000 asylum seekers in 2015 –about 1% of Germany’s population. Interpreted as an open invitation by many, the announcement triggered the mass mobilization of mostly Syrian refugees into Europe. UNHCR, the UN refugee agency, estimates that there are about 3.8 million refugees from Syria. The majority of them are in Egypt and Syria’s neighboring countries: Turkey, Lebanon, Jordan, and Iraq. Most of the Syrian migrants currently flowing into Europe come from Turkey, which until recently hosted about 1.6 million refugees. However, Lebanon is home to about 1.1 million refugees (about a quarter of the country’s population), many of whom are willing to follow on the footsteps of the wave from Turkey. Nevertheless, Syrians are not the only ones hoping for a better life in Europe, as there are many other nations in transition in Sub-Saharan Africa and the Middle East. From Yemen to Eritrea, millions of people dream the same. Are Europeans prepared to deal with a problem of this magnitude?

Since 2011, time and again we have suggested that a consortium of maritime PMCs should be contracted out to patrol the Mediterranean Sea in search for unseaworthy vessels and to deter human traffickers. The time to consider this course of action is now probably gone. On the other hand, the private security industry is increasingly lacking international hubris. Critically, the refugee crisis is at such volatile stage that it is perhaps more productive now to approach it as a state problem; one calling for at least these immediate state actions:

a) Border controls, at least on the more vulnerable European points of entry, need to be militarized. Soldiers can be friendly and approachable, but also firm when necessary.

b) Airport, port and railway security -at point of departure and not destination into Europe- need to be enhanced. Security contractors can play an important role here, just like they did after 9/11 when they spearheaded the worldwide implementation of the International Ship and Port Facility Security (ISPS) Code.

d) Better distinctions between migrants and refugees need to be introduced. It is very politically correct for the news media and politicians to call refugees migrants, or all the way round depending on the circumstances. However, this approach has proved to be very unproductive when it comes to rights and obligations based on Humanitarian Law.

e) A central intelligence unit needs to be created (i.e. a real and effective one, and with a budget) to collect data about the people who are not legally entitled to live in Europe but move freely from country to country as allowed by the Schengen Agreement. Again, private contractors can play a leading role here, as they own the IT technology required to make such a unit effective.

f) Police forces need to be integrated fully into the new security plans, which requires further funding rather than more budget cuts. In particular, this is because armed forces can secure borders, but not protect thousands of new asylum seekers or police the migrants who fail to apply for asylum.

An Orwellian future? No really, it just seems that the late 21st century is already upon us. 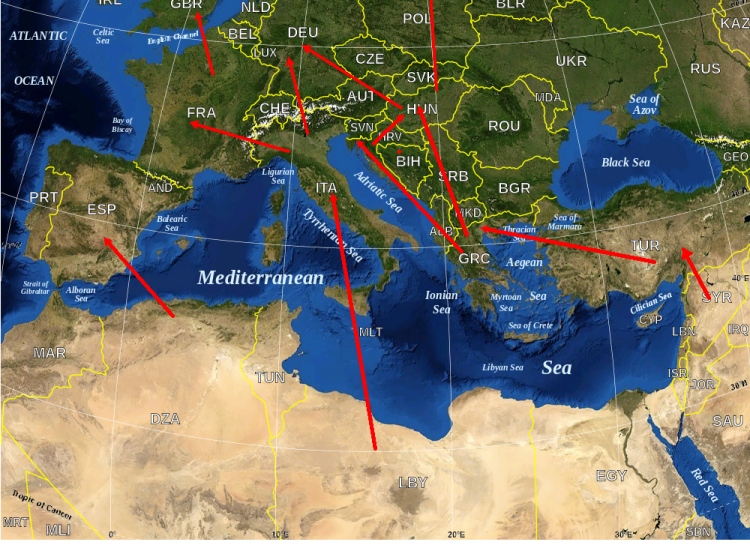 MilitaryEcology.com focuses on topical global security issues. We approach them against the backdrop of the fast evolving military ‘ecology’ landscape populated by myriad public and private actors often explicitly or implicitly operating in public-private ‘security partnerships. This Private-Public Military Ecology blog is linked to PrivateMilitary.org’s aims, which are oriented towards the dissemination of security knowledge. We also encourage people to engage in constructive debate.
View all posts by militaryecology »
« The Strange Case of the UK General Election 2015: A State Without a Vision of State Security
The Theory of Shock and Awe: Anarchism and Terrorism Taken to the Extreme »